The COVID-19 pandemic has undoubtedly brought many challenges, but it has also created opportunities. One example is our English Practice Partners Program (EPP), which provides our students and staff the chance to continue to practice their English virtually with native English speakers when our visitors and volunteers are unable to visit.

Meeting weekly via Zoom, they not only practice their English (pronunciation, comprehension, fluency, and confidence) but get to learn about their partner’s life and country, culture, and customs while sharing about their own. As one volunteer shared, “the EPP helps to bring our scattered world together.”

The following profile was written by Lisa, one of our US EPP volunteers, about her EYC English Practice Partner,  Phearak. Enjoy! 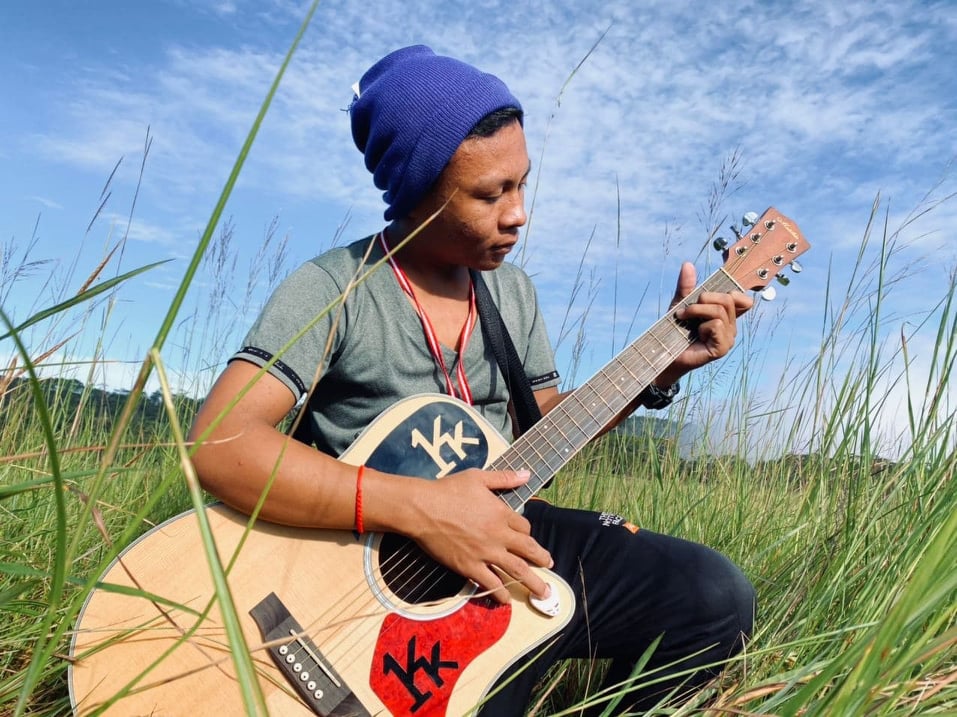 Twenty-year-old Phearak grew up in the countryside and is the eldest of four. He has two brothers and a sister aged 14, 16, and 18. Phearak’s parents are farmers, primarily growing rice, but also growing papaya, mango, lemons, bananas, and a few vegetables. The family lives in a one-room house on stilts, like many other Cambodian homes, and all the cooking occurs outside the house. Phearak and his family are practicing Buddhists, but he is also open to new religious ideas.

As a little boy, Phearak would help out his family by watching their cows and buffalo. He happily did this because he had other friends who were doing the same thing for their families, so the boys had fun together. The boys would bring some food with them for the day and would be gone many hours. The boys would often go into the forest where they would eat “jujube”  – a fruit similar to mango but smaller. Phearak watched the cows and buffalo for his family until the day he left for Phnom Penh.

At seven years old, Phearak started going to a local school in his province. There were approximately 30 students in his class. Some students could become “monitors” in the classroom, which meant they could assist the teacher in different ways. Usually, a classroom of 30 children would have three monitors. Phearak was chosen to be a class monitor for the school in his province. I think this means that Phearak was a very smart, respectful, polite, and friendly person overall!

In 2011 Phearak moved to Phnom Penh thanks to his father’s great aunt’s invitation. His aunt agreed that he could live with her, and she would provide him food as well. Phearak was incredibly excited by the invitation. His mother encouraged him, saying that he would have so many more opportunities in the city to get a better education AND a job! Phearak was amazed at the difference between life in the province and life in Phnom Penh! Everything in the city was so modern, and there were so many motos, schools, and people!

Phearak is studying English, computers, music, biology, Geography, Khmer history, and math, and he is very happy to be both studying and a team leader at EYC. He credits EYC for the person he has become today. In the future, he plans on volunteering for EYC to repay their kindness to him.

In the fall, Phearak went on a long hike to Knong Psar Mountain with 28 people that included several people from EYC. Phearak considers EYC to be a second family and is very grateful for all the help and support they have given him. As an example of how much Phearak enjoys and appreciates the staff at EYC, he recently helped one of the teachers from EYC on her wedding day.

I was delighted to learn that Phearak enjoys fishing, and just last week, he went fishing with a friend and one of his teachers from EYC. They were very successful in their fishing venture, and Phearak said they all enjoyed the fish they had caught, cooking it and eating it for breakfast, lunch, AND dinner! Phearak also plays Ultimate Frisbee for fun, and he knows how to play soccer.

Phearak would love to become an Animation designer, as that is his current artistic passion! Interestingly, his students love to draw “Manga” pictures, which is also a very popular art style here in America! Phearak is still musing over his future and his future education ~ I think it would be very exciting if somehow Phearak could find a school where he could study Animation. I imagine that he would be a passionate, eager, and committed student.