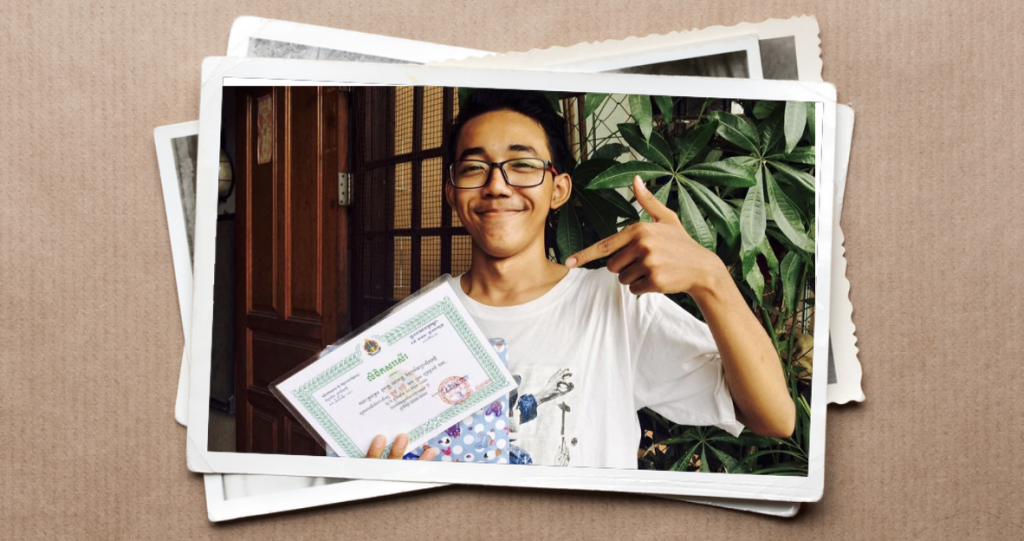 “Find Your Talent. Create Your Future,” EYC’s motto, could not ring more true than for the life of a young man named Rithy. In fact, when he first heard it, he wondered if it had been written about him and his EYC experience. Once a troublemaker in school, Rithy is now a tenacious, hardworking, and creative talent. So how did a boy totally uninterested in school and not willing to study become a university student, proficient songwriter, filmmaker, and graphic designer?

Rithy grew up in the community at the White Building. He comes from a family of five, and education has always been very important to his parents – his father, a soldier, finished Grade 12, his mother, a housewife, completed Grade 9.  When Rithy was young, however, he wasn’t interested in studying and didn’t feel comfortable at his school, and thus often got into trouble.

At age 12, after Rithy got into a fight with a school friend, his mother knew they needed to make a change, and she moved him to Aziza, hoping that would be a better environment for him.

Going to Aziza opened up a whole new world to Rithy. He immediately felt at home and was inspired by how hard the other students were working. For Rithy, Aziza was a place where his ideas were welcomed and where he could make friends with kids with whom he could be himself. He also discovered that he liked to study and, in fact, surprised both himself and his family by how well he could do when he applied himself. Given Rithy’s dislike of school when he was younger, his mother can’t believe all the things he is involved with now.

Once at Aziza, Rithy took advantage of all that EYC had to offer. He took English and computer classes (he’d never touched a computer before EYC), learned about songwriting, became a Team Leader, participated in numerous workshops, received a scholarship in Grade 12, and made connections through EYC partners and alumni. Because his experience was so positive, Rithy encouraged his sisters also to join EYC.

In addition, Rithy started to participate in and organize social activities with the other students. Trusting him more, his parents began to give him greater freedom feeling he was surrounding himself with good people at Aziza. In 2012, Rithy and another Aziza student, Sreyroth (the current school manager at Aziza Thmey), started a group called the White Building Youth. The group organized community clean-up efforts, parties, and other community activities, including a haunted house at Aziza, where they raised money through ticket sales to buy books for the school. Before the White Building (the location of Aziza) was demolished, the White Building Youth wrote a song and produced a music video celebrating the community and their lives there.

Today, nineteen-year-old Rithy is a student at Setec Institute studying Management Information systems, and he aspires to become either a graphic designer or a film director. Recently, Rithy directed a dramatic short film for school. The film, “Hold My Hand Again,” is about people having to say goodbye and was inspired by life at the White Building. Rithy wrote the script, directed and edited the film, and did the promotional graphics. His mother even makes a cameo!

Before EYC, Rithy had never touched a computer, nor did he have a strong sense of his interests or talents. Now he is creating, producing, and directing films, among other things. EYC provided opportunities, and Rithy had the natural talent and resourcefulness to build upon those opportunities. For example, a few years ago, he had the chance to work on a film project, and when he noticed the filmmaker throwing out a script, he retrieved the script in order to use it to learn about the screenwriting process.

Like so many other EYC students, Rithy didn’t just benefit from being a part of EYC, EYC benefited from Rithy’s participation. While now no longer a student at EYC, Rithy continues to volunteer there, putting his computer and graphic design skills to work.

So how did Rithy go from being a troublemaker disinterested in learning to a responsible and high achieving student building the life he wants? Finding a community where he could be himself, where he could share his ideas and express his creativity, allowed Rithy to build his confidence and a sense of personal empowerment. He always had what he needed within him to be a success; he just needed the right environment and support to unleash his innate talents.

Rithy truly does epitomize EYC’s motto of “Find Your Talent. Create Your Future!”