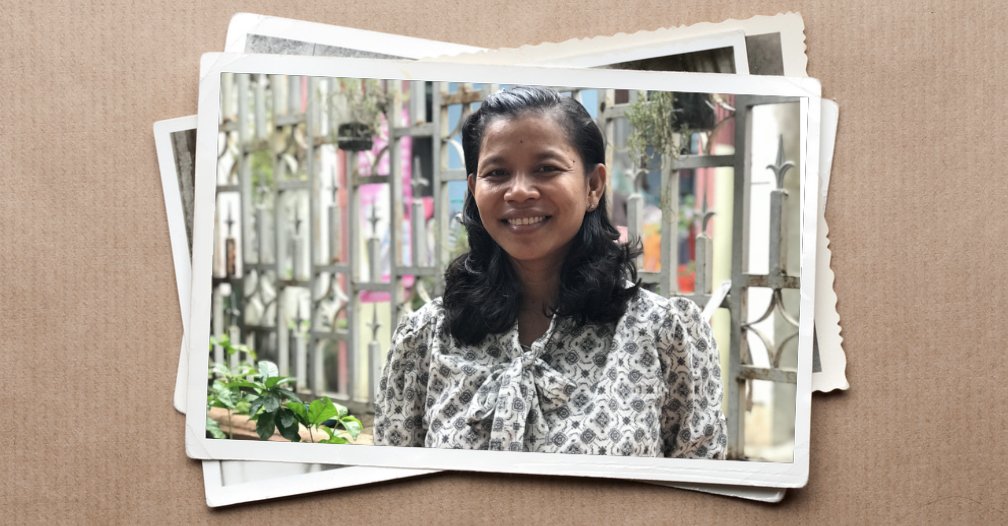 If EYC is a family, then Sothearoth is one of its matriarchs! Her journey with EYC began in 2007 when she started taking English classes at Aziza. The school was located in The White Building (slum community) where she was living with her sister. Drew, EYC’s founder, quickly recognized her potential recruiting her to become a teacher and later the school manager at Aziza. In 2018, she became the social worker for the Aziza Thmey community – a role that perfectly fits her innate ability to connect and build trust with people.

Sothearoth, who grew up in the provinces, moved to Phnom Penh in 2007 to go to university. While her family was able to support her first year of university, she promised herself that she could and would support herself beyond that.  Her father had instilled in her the importance of self-reliance and hard work, saying, “Help yourself before you need someone to help you.”

Sothearoth studied finance and banking at university, but after Drew recruited her to become a teacher, she realized her aptitude for teaching and switched paths. As a novice teacher, she focused on learning from others.
She would spend time observing teachers, making notes on their body language, the ways they interacted with the students, and which activities seemed to resonate most with the kids.

Sothearoth continues to learn, and she keeps her teaching fresh by watching YouTube videos, applying methodologies learned through some of EYC partner organizations, and identifying games tied to lessons, which help the kids learn without realizing they are learning!

Since Sothearoth lived in The White Building, first with her sister and later with her husband Rany, a longtime teacher and school manager at EYC, she developed a profound understanding of and appreciation for the realities facing the EYC students and their families. That knowledge, coupled with her engaging and friendly personality and the fact that she always honors her commitments, has helped her in her social work role. She has become a trusted person within the community to whom families listen and come to for support.

Sothearoth is proud to work with EYC, which she views as a second home and second family. She is dedicated not only to helping this “family” grow and evolve, but to being the best teacher, social worker, and resource for the kids and their families. When she was young, she dreamt of helping poor children take control of their lives and build a better future. Her work with EYC is allowing her to do just that.

Realities of Being Born a Girl in Cambodia: Simouy