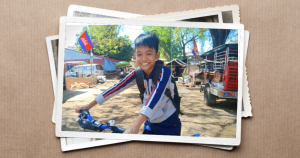 We would like to introduce you to “Daniel”, a young EYC student.

Daniel, who is 11 years old, lives with his father, a welder, his mother, a grocery vendor, his seven-year-old brother, and his grandmother.  Their house is close enough to EYC that he can bike on his own to class – something that he is very proud of.

Daniel was six-years-old when he started classes at EYC, and although he tends to be quieter at home, he is very active at EYC, participating in class and helping other students when they need assistance.

When asked what she thinks of EYC, Daniel’s mother smiles.  She shares how much she appreciates the English teaching Daniel is receiving through EYC, and she hopes that with the skills he is learning he will be able to get a good job.

Daniel says he likes EVERYTHING about EYC and wants to participate in EYC for as long as he can!  In addition to English, he studies computer. He used to play football with the EYC team but found he was too tired afterward to do the work he needed to do for school.  His favorite subject in public school is Math, and when he is not in school he likes to play with his Legos.

Because of his love of Legos and Math, his mum thinks he could be an architect. However, Daniel says that he wants to be a policeman when he grows up so that he can help people. Although this wouldn’t be the career his mum would pick for him, she supports him in his dream.

Daniel’s mum shares that she did not live with her mum when she was growing up, and no one supported or encouraged her to study much.  She wants to create a different opportunity for her boys by being close to them and supporting them as they pursue their education. Daniel continually beats her expectations and she is very proud of him!