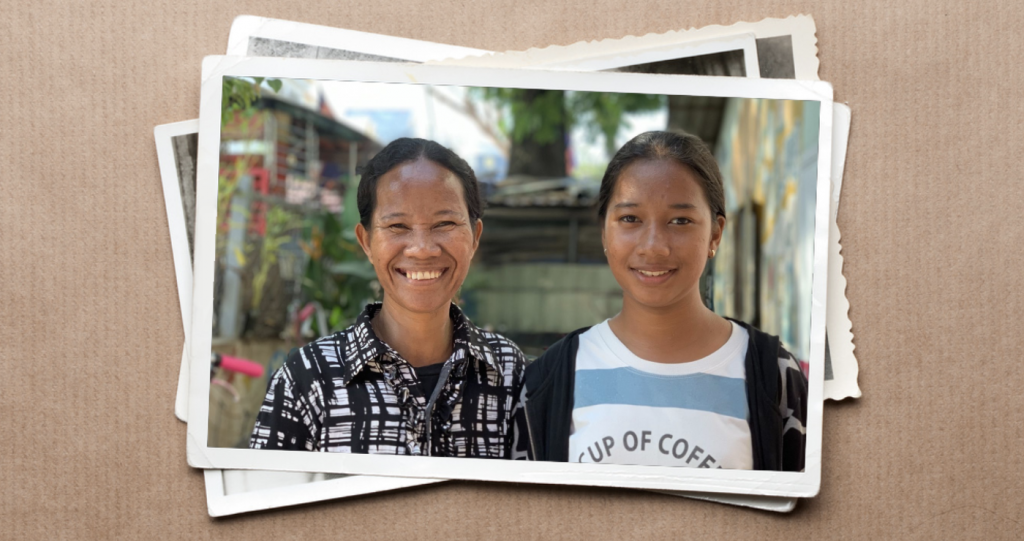 Like many who find themselves living in the urban slum communities of Phnom Penh, Ming Pheap left her home in the countryside in the hope of finding better opportunities in the city.  At sixteen, someone she knew promised they could get her a job in Phnom Penh. Sadly, that job was not what she imagined. The dream of finding work in the city turned into a nightmare when it became evident that she had been sex trafficked. Lacking education and a safe way out, Ming Pheap was forced to make her living as a sex worker for close to 12 years.

In 2016, her life changed when EYC staff learned about the precarious position of Ming Pheap and her daughter, and she was offered a job as a cleaner at the EYC school her daughter attended.  The job ended up being a lifeline, providing her a degree of much-needed financial stability and security. Her income as a sex worker was very unpredictable, and there were weeks when she didn’t have money for rent or food.  If Ming Pheap were a couple of days late on her rent, her landlord would lock her and her daughter out of their home until Ming Pheap could come up with the money.

In hope of earning some money to supplement their income during these times, her young daughter would go out at night to collect cans. Now, thanks to a steady job at EYC, their living conditions have improved. Ming Pheap can pay her rent and buy food for herself and her daughter, and her relationship with her landlord has also transformed. He now not only trusts her but is open to lending her money to pay school and material fees when needed.

Ming Pheap is proud of her work at EYC. There she is treated with respect and no longer feels the stigma of being a sex worker.  She is happier and more optimistic about her life and her daughter’s future. For many years, Ming Pheap worried that her daughter’s opportunities would be limited and feared that she would be forced to follow in her mother’s footsteps and become a sex worker. Instead, her daughter, a bright and dedicated student, is finding success both in her EYC classes and at her state school.

EYC truly cares about the students and their families…they don’t discriminate against people based on their income or occupation.

According to Ming Pheap, EYC is different from other organizations working in her community.  She believes EYC truly cares about the students and their families. They are approachable, fair, and transparent and don’t discriminate against people based on their income or occupation.

Ming Pheap’s life has come a long way since her fateful arrival in Phnom Penh over sixteen years ago. She is grateful for the chance EYC has given her. It has really transformed her life and that of her daughter.  While she has found self-respect and stability through her work at EYC, what she prizes most is that her “baby is now safe.”