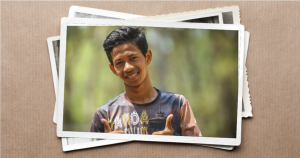 Imagine at the age of seven, spending your evenings selling balloons to passersby on the busy streets of Phnom Penh. That is the life Seyha, now 21, led for almost a decade. Working often late into the night to earn $1.25-$1.50 to help support his family, he would then search the rubbish for discarded food to eat. He never imagined one day he would be able to speak English, be a university student, and have a steady job — let alone travel to numerous countries!

Neither his dad, a moto-driver, nor his mum, a seller, speak English, and they both stopped school in grade six or seven. Twice his family faced eviction due to development. They currently live in a rented room at a pagoda area following the demolition of their last home in the White Building slum community.

Life for Seyha began to change one day in 2011 when he noticed kids gathering outside a room at the White Building. He asked what they were doing. They replied they were waiting for their class at EYC’s Aziza school to start and suggested he come along. Seyha had always wanted to learn English, but his family couldn’t afford to send him to classes. It was not until he discovered that he could take classes for free at EYC that his dream of learning English became a reality. To this day, he continues to study English there.

English may have been what first drew Seyha to EYC, but once inside, he found much more! The English and computer classes helped him build his knowledge and skills; the chance to volunteer gave him purpose; and the opportunity to participate in sports built his confidence. He found a community of respect where everyone is valued and supported. EYC and the friends he has made there have become an extension of his family, and they continue to be his support system today.

Over the years, there were hard times, and Seyha didn’t want to study. His EYC teachers, unwilling to have him give up on his studies, would come by his house to find out what was going on and what he needed help with. They encouraged him to return to school. From this, he learned the importance of moving forward – even if things are bad today, tomorrow is a new day, and things can always get better. The fact that the EYC teachers want the best for each of their students has meant a lot to Seyha. He now, in turn, does his best to support and motivate his friends, encouraging them to take opportunities to learn new things and develop themselves.

As Seyha explains, EYC doesn’t care where a student comes from. They care that the student comes to class, and they care about where the student can go in life. At EYC, students are given the chance to do more with their lives while also learning how they can help others.

Sports have played a significant role in Seyha’s life and personal development, particularly Ultimate Frisbee, which he discovered through EYC. He now plays with SWA Ultimate Frisbee – Cambodia’s first youth Ultimate team. Because he comes from a poor family, he never imagined that he would have the chance to travel. However, over the last three years, he has traveled to Vietnam, Thailand, the Philippines, Hong Kong, and China to compete in tournaments.

Following his graduation from high school, Seyha’s parents did not want him to continue on to university but instead get a job as they didn’t have money to support his education. However, wishing to continue his studies, Seyha sought advice from his EYC teachers who encouraged him to apply to EYC for a university scholarship. He took their advice and received a two-year partial scholarship, allowing him to pursue a major in international business at Beltei University. His parents now understand that with a better education, his opportunities are greatly expanded.

While pursuing his university degree, Seyha is working as the Assistant School Manager at EYC’s Lakeside school. This job helps him not only give back to EYC but also support his family. While the job has its challenges, Seyha is learning from the experiences and is building new skills that will serve him in the future.

For Seyha, EYC has always been about more than just getting an education. It has enabled him to build his confidence and believe in himself and his potential. He is a long way from his days selling balloons on the street, but like those balloons, his future is sure to soar.

Click here for a glimpse into what Seyha’s life was like as a student and balloon seller.