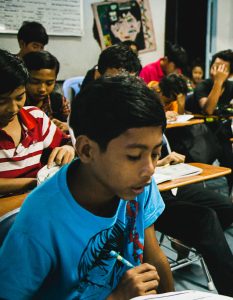 20-year-old Kolboth has a long history with EYC.  In fact, it was his family’s house near the White Building, that EYC rented to open Aziza.  When Kolboth was six-years-old, he and his brother moved in with his aunt at the White Building and began taking classes at EYC. While Kolboth’s family has struggled, his aunt has been a source of stability and strength for him. He credits her with always encouraging him and stressing that education is the key to opportunity. He wants to repay her support by working hard and doing well.

EYC has been integral to Kolboth’s life over the last 14 years, teaching him skills both inside and outside the classroom and creating an opportunity for him to forge deep connections with the other students from Aziza. Kolboth has taken English and Computer classes, participated in community clean-ups, volunteered in the medical/dental program, worked as an assistant computer teacher, and as a Team Leader in the sports program for soccer. He has also received four scholarships from EYC. The first paid for extra math classes to prepare for the national exam, and the rest have covered expenses related to his first three years at university. Kolboth, who is studying IT with a focus on network engineering, is second in his class of fourteen at university. 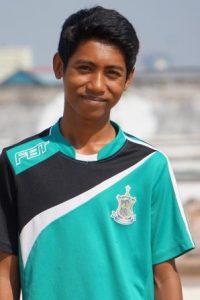 While obstacles remain, hard work and commitment are ingrained in Kolboth, and he continues to push ahead. Following the demolition of the White Building, his home for many years, Kolboth and his brother moved with his aunt to a home located an hour from his university. Kolboth is in school Monday-Friday from 8am-11am and then works at his job at Monument Books from 12pm-8pm, six days a week. The money he earns – $160 per month (~$0.83 an hour) – goes to cover his personal expenses and school fees. On Sundays, he coaches EYC’s Lakeside soccer team. While he would like to continue taking English classes at EYC, his schedule is too busy right now. Instead, he takes advantage of speaking with the foreign customers at Monument Books to practice his English. To say his life is full is an understatement!

The community at the White Building, in which Kolboth grew up, had many challenges. The pressure to get involved with drugs and gangs was intense, and many of Kolboth’s peers succumbed to the pressure. He did not, and thus, Kolboth became a role model for many of the younger students and kids in the community.

A few years ago, the Team Leader for the Aziza soccer team had to leave, and Kolboth was asked to take over. The team was composed of EYC students and two boys from the White Building who were involved in the gangs. There were often conflicts between the gang members and the rest of the team, and Kolboth had to work to smooth things out continually. In addition, Kolboth soon realized that the two gang members were addicted to drugs. Rather than kicking them off the team, Kolboth felt he needed to do something to help them see a different way forward. He kept encouraging them to play sports and tried to show them how to be better people. One day their behavior became too much for Kolboth to handle, and he said to them, “If you two don’t change, we will have to say goodbye.” Later that day, the boys knocked on his door and begged him not to leave them. He did not give up on them, and they soon stopped taking drugs and continued to play sports. He very likely changed their lives simply by believing in them and showing them another way.

Kolboth is currently coaching the boys’ soccer team at Lakeside, and his coaching goes beyond the field. It’s important to him to forge a relationship built on trust with the boys so that they will be honest with him when he asks whether they are doing drugs or not. Kolboth encourages the boys not to fall into the trap of drugs and to focus instead on sports where they can build not only a strong body but a strong mind. 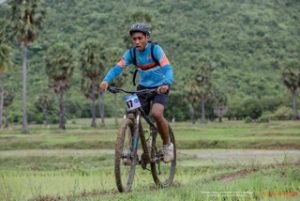 Although he didn’t have a role model in his family, Kolboth was always determined to do whatever he needed to do to go to university. With the support of his aunt, his own determination, and EYC, Kolboth is succeeding in achieving his goals.   Kolboth is a smart, hardworking, thoughtful, and caring young man who epitomizes the ethos of EYC. He will go far and will bring others with him.

The word Kolboth uses to describe what EYC means to him is: EYC គឺជាជីវិតរបស់ខ្ញុំ – EYC kuchea chivit robsakhnhom which means “EYC is my life.”