Dyno, now 25 years old, first heard about EYC when he was 16. Team Leaders from Lakeside were opening Youth School in his community, and as two of the Team Leaders were hauling in school materials, they noticed Dyno outside the school. They asked for his help, proceeding to tell him about EYC and explaining that he could come study there for free.  That meeting would prove very fortuitous for the future trajectory of Dyno’s life.

At 16, Dyno, the 5thchild of six siblings, had lost his father and was heading down a dangerous path. Dyno shared that kids in his slum community would follow each other – if one of them did something, often the “wrong thing,” the others would follow. As they grew older, most of the kids in the community joined gangs and became involved in drugs and violence. Before that day outside Youth School, Dyno was heading down that very same path. 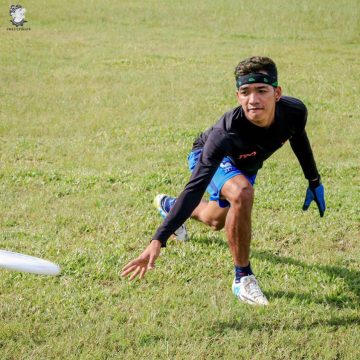 After meeting the EYC Team Leaders, Dyno started studying English at Youth School, and his life began to change. He no longer hung out with his old friends as much, having come to recognize the difference between their behaviors and activities and those of his Youth School peers.

Along with the teaching he received in English and computers, Dyno also took advantage of EYC’s dental program.  With EYC’s financial support, he was able to get two badly damaged front teeth fixed.  To have people care about him in this way meant a lot to him, and Dyno committed himself to giving back to the organization.

Dyno became a Team Leader of the football program at Youth School and began to understand he was just that – a leader. When he was with the young kids he coached in the community, he saw he was a role model for them.  Dyno realized he needed to learn not only how to control himself and be more thoughtful about what he did and said, but also how best to motivate and inspire the younger kids. Dyno came to understand that if he stayed in the gang and mistreated people, others would think that type of behavior was ok. He credits the leadership training he received from EYC along with the opportunities EYC provided him to put that training into practice as pivotal to changing the trajectory of his life. 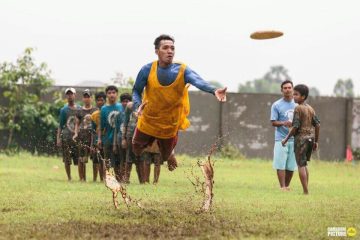 In addition to football, Dyno became involved in the Ultimate Frisbee program offered at EYC.  He continues to participate in the program to this day, acquiring additional valuable life lessons through the sport. Because there are no external referees in Ultimate Frisbee, Dyno learned that the two players involved in a foul had to come to a decision together as to how it should be handled.  His coaches stressed the importance of acting with integrity. Dyno would go home and think about every foul, asking himself if had he handled things correctly with the opposing player. He began to apply that same thinking to all of his interactions with people, and through that he developed an even greater sense of personal accountability.  For Dyno, “the value of the game is to be responsible and honest to yourself.”

The skills and values Dyno learned through classes, sports, and the Team Leader Program – hard work, personal accountability, problem-solving, teamwork, and helping others – are values that he continues to apply in his life.  Without EYC Dyno says he would “never have realized what is right and what is wrong” and most likely would be addicted to drugs and deep into gang life and violence.

Today Dyno is in his second year at the Royal University of Phnom Penh studying Information Technology.  He receives a scholarship from EYC for his studies. Dyno had to wait two years before being able to go to university because he did not have the money or a clear sense of what he wanted to study.  However, during that time he attended a two-year computer vocational training sponsored by EYC which helped to confirm his interest in IT.

In addition to his studies, Dyno is responsible for his mother and brother.  To help support both his family and his education, Dyno works two jobs – he is a cleaner/receptionist at Rodwell Math Institute during the day and a singer at a restaurant in the evenings. Rodwell, an EYC partner providing math and science tutoring, also leads the Ultimate Frisbee program.  It was through his interest in sports at EYC that Dyno first connected with Rodwell Math Institute, which not only gave him a job but also stepped in to help during a family tragedy.  A few years ago, Dyno’s family house burned down leaving the family homeless. Rodwell organized a fundraiser for the family helping them get back on their feet.

Dyno’s life is busy and challenges persist, but with his innate talent and the opportunities, support, and learnings provided by EYC and its partners, Dyno is committed to his future and to being a role model for others.

When asked what Khmer word best describes EYC to him, Dyno chose the word

How Art and Music Make a Difference: Sombo

The COVID-19 pandemic has undoubtedly brought many challenges, but it has also created opportunities. One example is…