At five years old, Mok Sombo’s happy childhood changed drastically when his father passed away from HIV, and his mother was also diagnosed with HIV. The extended families cut off contact with Sombo’s family leaving his mother to fend for herself and her two boys in the slums of Cambodia. Out of fear and lack of education, parents in the community told their kids not to play with Sombo and his brother. Sombo describes this period of time as feeling like he was living in a black plastic bag where there was no light, and it was difficult to breathe.

Then, at age 16, a classmate, Bun Nakit, (a student at EYC) brought Sombo to Youth School. From that moment, Sombo knew EYC was different. There, the teachers and students welcomed him warmly accepting him for who he was and helping him see his worth.

Sombo explains, “EYC is so meaningful for me because when I start at Youth School, everything is different. My teacher, my classmates, and friends from other (EYC) schools, are love, and they give me a lot more things than the community I live in. They teach me what is right and what is wrong, and they give me advice when I do something wrong and praise when I do a good thing.” 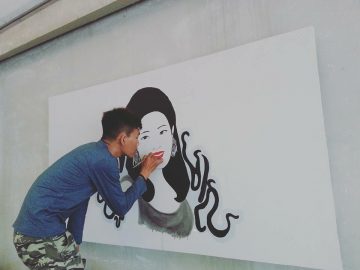 Sombo took English and computer classes at EYC and became a Team Leader at Youth School and a computer teacher at Aziza. Additionally, through EYC’s partnerships with Sa Sa Art Projects and Music Arts School, teachers and volunteers recognized and helped Sombo develop his talents as an artist and musician.

Sombo, now 21 years old, is a scholarship student at EYC studying Design at SETEC Institute and working as the Art Director and Graphic Designer at Music Arts School. He is an accomplished artist and musician and continues to give back to EYC by creating school murals and working on various EYC art projects.

For many years, Sombo kept his mother’s HIV a secret because he was afraid that people would look down on him and his family if they knew. Today, he is no longer afraid. Because of the sense of community he has found at EYC, he has the courage to be himself and express his talents in the world.

Like many of our students, Sombo was filled with potential but was lacking opportunity. Through EYC’s programs and support he now has a future that would have seemed unimaginable a few years ago.

Teaching from the Heart: Pheary