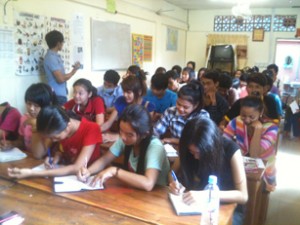 EYC was delighted to send six of our staff and students to attend a seminar on Gender and Behavior Changes facilitated by GADC (Gender and Development Cambodia); a local NGO promoting gender equality as a “basic human right necessary for Cambodia’s social, economic, and political development”.

Following their experiences and knowledge gained, these participants did their own training for EYC students on gender issues and developed a training class that was conducted over eight sessions at Aziza school, covering topics on Sex & Gender, Gender in Cambodia, Gender-based Violence, and Protection of Women’s Rights.

In the 2010 Global Gender Assessment conducted by USAID, in which the agency measured broad inequalities between women and men (Gender Gap Score), Cambodia placed 104th of 134 countries. The Gender Empowerment Measure (representing women’s political and economic participation) of the same assessment placed Cambodia 83rd of 93 countries.

The goal of this knowledge sharing initiative was to reduce gender-based violence in our target communities and to encourage girls to assume more leadership roles in our schools in addition to helping them to be more empowered and comfortable with openly discussing gender-based stereotypes and injustices.

As a result of this training class students worked together on creating a poster delivering their personal message and position against gender inequalities. Ms. Syneoun, a former student and team leader at Aziza and the course’s facilitator shared, “I was thrilled to participate in the gender training. It is important to improve youth’s concept about stopping violence based on gender and value women at the community level”.

It is encouraging to see how our students are increasingly becoming aware of wide-spread issues affecting their country and are showing self-driven initiative by taking an active role in developing their countries starting at the community level.

We are currently working on replicating this training at our other schools.

While the last six months have been full of challenges, it has also been marked…